There are more things in heaven and earth, Horatio,

than are dreamt of in your philosophy.

This is a report    based on a documentary film – “Unacknowledged: An Exposé of the World’s Greatest Secret”  (2017).  It is centered on the work of a doctor/investigator – Dr. Steven Greer.

[This is a very well done film; and I highly recommend that you see it  –

When he was a kid, Greer saw a UFO – a seamless metal disc … so he knew that such things were real.

In 1990 he founded the Center for the Study of Extra-Terrestrial Intelligence (CSETI)  to create a diplomatic and research-based initiative to contact extraterrestrial civilizations.  It was a citizens’ diplomacy effort (similar to Physicians for Social Responsibility)  Friendly contact was not being pursued by governments.

By 1992 he was getting visits from the Head of Army Intelligence, from people inside the NSA and other 3-lettered agencies.

This documentary spends some time showing the extreme secrecy with which the UFO issue was handled from early on … and also explains the (highly deceptive) methods that were utilized to control public opinion and sentiment.  One pretense after another.

The “reason” most commonly given – as to “why the public must not be allowed to believe that UFO’s are real – is ‘to avoid panic’.  But (personally) I do NOT believe this. I do not believe that panic would ensue if the facts were left alone (and then people WOULD soon believe that we’re being visited by extraterrestrials) … NOR do I believe that the people who are making these decisions    are withholding the information (and deliberately ‘debunking’ sightings which THEY KNOW ARE REAL) … IT’S NOT BECAUSE THEY WISH TO AVOID PUBLIC PANIC.

ANYONE who has access to this evidence knows that it’s real … that THEY are Real.

And the rascals who (mainly) run this world   do not want the populace to begin LOOKING TO THE ALIENS for LEADERSHIP (because then, our phony leaders would lose their authority … and their jobs)

[Simon Sinek, the cultural anthropologist and speaker   has made it very clear – that a ‘Real Leader’ TAKES CARE OF THE PEOPLE HE’S RESPONSIBLE FOR.  He keeps them SAFE.]

Besides, it’s not the Aliens who are wearing the Black Hats in this story … It’s US!  We’re the ones with the black hats.  THEY are worried that we may hurt each other (which we have and do)   OR do damage somewhere ELSE in the universe.

Whenever we’ve tried to take nuclear weapons into space, they (our elder brothers) have destroyed them.

“There is no evidence, I wish to emphasize, that these life forms from elsewhere are hostile towards us.  But there is a great deal of evidence that they are concerned with our hostility.”

Within weeks of the Roswell crash (because we now had possession of alien craft, etc.)  the CIA was formed … and the US Air Force was split off from the Army, and made into its own separate branch of the military.  And … it led to the development of Unacknowledged Special Access Projects (USAP’s) / Black Ops.

Eisenhower knew about these Black Ops … but by 1961, when he left office, he had completely lost control of them.  He said –

“We must guard against the acquisition of unwarranted influence, whether sought or unsought, by the military industrial complex.”

He was referring here – NOT to the regular military … but to the (illegal, covert, unregulated) military-industrial intelligence complex … which now seeks total dominion and control.

Their black budget (from our tax-money) is now 100 to 200 billion dollars a year.   As of 2017 there was 2.3 trillion dollars … which we were unable to track … going to this covert operations community.  Dick Cheney, Ben Rich, Kelly Johnson, et al.

And no one … NO ONE   has oversight over them, or can control them.

They (can and do) wage their own wars.  They go into the middle east … to the oil fields.  They do whatever they like. With OUR TAX MONEY … and the WEAPONS  of OUR MILITARY.

We used this form of deception, for example, in the Gulf of Tonkin, during the Vietnam War (to get more support for the war)

Wernher von Braun (the German physicist who developed the V-2 rocket for Hitler …  was later brought to America.    Following the war, he was secretly moved to the United States, along with about 1,600 other German scientists, engineers, and technicians, as part of Operation Paperclip.

Von Braun got us to the moon.

Well, on his death-bed, he told Dr. Carol Rosin, of Fairchild Industries about an elaborate False Flag operation.

With the knowledge we now have we could go one of two ways.  We could have most of the world in poverty (as we have now) with most of the wealth and power in the hands of a few … and continual war … or

We could have a life of universal affluence, no pollution, and virtually free energy.

This is the choice that’s before us.

From Wikipedia, the free encyclopedia
(Redirected from Steven Greer)

Jump to navigationJump to search

Steven Macon Greer (June 28, 1955) is an American ufologist and retired traumatologist who founded the Center for the Study of Extraterrestrial Intelligence (CSETI) and the Disclosure Project, which seeks the disclosure of allegedly classified secret UFO information.

Greer was born in Charlotte, North Carolina in 1955. He claims to have seen an unidentified flying object at close range when he was about eight years old, which inspired his interest in ufology.[1][2]

Greer was trained as a Transcendental Meditation teacher and served as director of a meditation organization.[1][3] He received a B.S. degree in biology from Appalachian State University in 1982[4] and an M.D. degree from the James H. Quillen College of Medicine of East Tennessee State University in 1987.[5] He attended MAHEC University of North Carolina where he completed his internship in 1988 and received his Virginia medical license in 1989.[5] That year he became a member of the Alpha Omega Alpha Honor Medical Society.[6][7][8]

Main article: Center for the Study of Extraterrestrial Intelligence

Greer founded the Center for the Study of Extra-Terrestrial Intelligence (CSETI) in 1990 to create a diplomatic and research-based initiative to contact extraterrestrial civilizations.[2][3] In 1993, he founded the Disclosure Project, a nonprofit research project, whose goal is to disclose to the public the government’s alleged knowledge of UFOs, extraterrestrial intelligence, and advanced energy and propulsion systems.[9][10][11][12] The Disclosure Project was founded in an effort to grant amnesty to government whistle-blowers willing to violate their security oaths by sharing insider knowledge about UFOs.[13] Greer says he gave a briefing to CIA director James Woolsey at a dinner party, although Woolsey has stated that he listened politely.[14][15]

In October 1994, Greer appeared in Larry King‘s TV special The UFO Coverup?[16] In 1995, Greer worked as a physician at the department of emergency medicine at Caldwell Memorial Hospital,[3][17] where he was chairman.[1]

In 1997, Greer, along with other members of CSETI, including Apollo astronaut Edgar Mitchell, made a presentation at a background briefing for members of Congress.[18] In 1998, Greer gave up his career as an emergency room physician in favor of the Disclosure Project.[19][20]

In May 2001, Greer held a press conference at the National Press Club in Washington, D.C. that featured 20 retired Air Force, Federal Aviation Administration and intelligence officers.[2][21][22][23][24][25] According to a 2002 report in the Oregon Daily Emerald, Greer has gathered 120 hours of testimony from civilians and various government and military officials, including astronaut Gordon Cooper and a brigadier general, on the topic of UFOs.[9]

Greer authored “Unacknowledged: An Exposé of the World’s Greatest Secret” in 2017. The book is also the subject of a 2017 Documentary film, titled “Unacknowledged,” directed by Michael Mazzola.

In 2013, Greer co-produced Sirius, a documentary detailing his work and hypotheses regarding extraterrestrial life, government cover-ups and close encounters of the fifth kind.[26] The film was directed by Amardeep Kaleka and narrated by Thomas Jane, and covers Greer’s 2006 book Hidden Truth, Forbidden Knowledge. The movie premiered on April 22, 2013, in Los Angeles, California, and features interviews from former government and military officials.[27]

Sirius depicts a six-inch human skeleton known as the Atacama skeleton, and features images and a DNA test of the skeleton.[28][29] Genetic evidence showed that it was human, with genetic markers found in “indigenous women from the Chilean region of South America”. The director of the center that did the analysis said, “It’s an interesting medical mystery of an unfortunate human with a series of birth defects that currently […] the genetics of which are not obvious.”[30][31]

From Wikipedia, the free encyclopedia

Jump to navigationJump to search

Simon Oliver Sinek (born October 9, 1973)[1] is a British-American author, motivational speaker and organizational consultant. He is the author of five books, including Start With Why (2009).[2]

Sinek was born in Wimbledon, London, United Kingdom and as a child lived in Johannesburg, South Africa, London, and Hong Kong before settling in the United States. He graduated from Northern Valley Regional High School at Demarest in 1991.[3] He studied law at London’s City University, but left law school to go into advertising.[4] He received a BA in cultural anthropology from Brandeis University.[5]

Sinek began his career at the New York ad agencies Euro RSCG and Ogilvy & Mather.[5] He later launched his own business, Sinek Partners.[5] 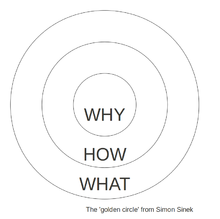 Simon Sinek’s golden circle which describe a perspective of the influence of successful leaders and organisations.

Sinek has written five books. Start With Why, his first book, was published October 2009. His second book, titled Leaders Eat Last, appeared on the bestseller lists of the Wall Street Journal and The New York Times.[5]

As a motivational speaker, Sinek has given talks at The UN Global Compact Leaders Summit,[6][third-party source needed] and at the TEDx conference.[7]

In June 2018, The Young Turks reported a $98,000 no-bid contract from U.S. Immigration and Customs Enforcement (ICE) for “customized Simon Sinek leadership training” to take place between April 26 and May 15 2018.[8]

Sinek is also an instructor of strategic communications at Columbia University,[9] and is an adjunct staff member of the RAND Corporation.[10]